Think Piece - Leadership of thinking: What's loss got to do with it?

Think Piece - Leadership of thinking: What's loss got to do with it?

How can psychoanalysis and systems theory contribute to the leadership of thinking in the UK FE and Skills sector?

Leadership of thinking: What’s loss got to do with it?

The rate of change in organisations means that loss is now always part of working life: loss of colleagues (e.g. in restructuring), loss of stability, loss of what went before. To ensure that change is successful, leaders have to manage their own feelings of loss and help staff deal with it; otherwise change is likely to be undermined – sometimes unconsciously- and staff become demoralised and disengaged[1].

Freud said that a failure to mourn can lead to problems: we lose interest in the world around us, become unproductive, lose our passion and capacity for new relationships.

He discovered that mourning and severe depression share the same characteristics: lack of interest in the world around us; an inability to form new bonds and love; a lethargic loss in activities and productiveness. We emerge from mourning able to move on and regain our liveliness, productivity and capacity for new relationships. But where we can’t mourn, we may instead become seriously depressed. We then can’t move on with the loss and are stuck.

Organisational change is obviously not the same as a personal bereavement, but dealing with the loss it involves can still be very difficult. And the effects of not dealing with loss can be as harmful to organisations as it can be to individuals.

2.1 – Experiences of loss in organisations

Participants’ comments about their organisations bore witness to the acute loss pervading organisations across the sector. Loss of jobs, values, identity, curriculum and loss of organisations themselves:

2.2 – Dealing with loss as leaders

Like many of us facing loss in our personal lives, the participants commonly deal with loss in their organisations through attempting to by-pass mourning and get through loss as quickly as possible:

Dealing with loss requires looking back and acknowledging the past without getting stuck in it. Interestingly founders, original values, succession and previous generations were more in view than in previous seminars: the painful loss of founding values, questioning whether to invite the founder to an anniversary celebration, how to have an effective transition when you step down as the leader.

Looking backwards and forward was also apparent when participants asked whether they’re the right people to be leaders in the sector now. Some thought they absolutely are – they’ve made a paradigm shift from earlier models of leadership in the sector, and are the ones that can now lead the sector forward. Part of the shift in their leadership is the way they are involving staff in decision making and change:

“I’ve enabled space for people to decide what change is necessary. I tell staff the issues and ask them for solutions. So we’ve created a constant way of dealing with change. The downside is that we may miss the losses that are taking place.”

“We try to get up joined up solutions to change: we always include the union in our management meetings.”

Other participants were leaving or considering leaving their leadership positions:

The far reaching loss in organisations across the sector is acute and painful. The leadership of thinking needs to acknowledge this and help the sector to mourn so that it can, as Freud said, ‘decathect’ from the past, adapt to the future and create new life. Mourning involves remembering and recognising what has gone and what is going. When we mourn a person, our internal world and the relationships within it change to accommodate the loss. Our relationship with ourselves also changes in the sense that the lost person now only exists in our internal world. Likewise, if the sector is to accommodate and adjust to loss it has to change it’s relationship to itself and the different parts within it.

2.3 – Experiences of loss in the sector

The sector is used to change and in many ways handles it extremely well. However, the stoical and placid acceptance ignores loss and seems to remove agency, as well as confusing identity, values and primary task. The danger is that these then morph without thought. Moreover, they morph with an undertone of unexpressed, un-dealt with feelings of loss. As one participant said: “I think we take loss on the chin and it creates an acceptance dynamic that doesn’t manage the experience of loss well. As if there’s no anger. We really get our pecker up and then go straight into re-organisation. Why don’t we do any of the yearning and anger? [Bowlby’s second phase of mourning] [2] We’re giving the impression to Government and others that says: okay, we can get away it.” This acceptance may produce a further toxicity, which is that the lack of fight compounds loss as it feeds into a sense that what is lost may not have been worth fighting for.

In order to cope with the on-going onslaught of change and the loss it incurs, we think it’s likely that the sector has developed an illusion that it’s possible to continually change in any number of ways. The illusion seems to us to mask deep-seated disillusion as well as a sense of impotence, which we discussed in the last Think Piece. The illusion also encourages an inevitably fragile omnipotence and tendency towards mania/a manic response to change. Yearning, searching and anger, disorganisation and disrepair are banned, which severely limits the possibilities of re-organisation. Instead, liveliness will decrease and depression will increase. A depressed organisation or sector is of course ill equipped to weather the dislocating turmoil FE and Skills now faces.

The acceptance of continual change in the sector denies loss. The leadership of thinking needs to explore illusion and disillusion and generate diaglogue about loss. It needs to identify processes of change that supports healthy mourning. And importantly, government and other stakeholders should be engaged in thinking about the cost of continual change and the importance of allowing a more sustainable process that builds the health and future of the sector.

We asked in the last Think Piece on Persecution whether sometimes feelings of persecution in the sector mask feelings of impotence. Similarly, the illusion and ‘acceptance dynamic’ mask feelings of loss. As well as encouraging depression, this means that loss seeps out in problematic ways. One part of an organisation, or one part of the sector for instance, may then hold the difficult feelings and get stuck and unable to change. We wonder whether it’s not just persecution and loss, but if the difficulty in facing and understanding painful feelings generally get masked and entangled.

Unexpressed, unacknowledged and denied emotions seem to commonly get entangled. Anger may avoid loss; loss may underlie and mask a slightly precarious, manic excitement and focus on the future; grievance may mask grief. Disentangling emotions, understanding what’s behind them and the link between particiular feelings and their expression, is vital to establishing healthier organisations and a more robust, resilient sector with a genuine capacity for change and development.

The level and depth of change in the sector means continuing and continual loss. While leaders need to be able to look forward and focus positively on the future, if mourning is avoided, depression is likely to get more rooted and harder to shift. We wonder if there is a tendency to take, as it were, anti-depressants which dull the pain (and the mind), but do not go near the causes of depression. This will make change increasingly difficult. Failed change is already commonplace; rather than remedying that, the failure to mourn supports it. Furthermore, when loss isn’t addressed other emotions, such as insecurity and feelings of abandonment, persecution, compulsion and destructive aggression are activated and have more room to dominate.

Facing loss is enormously difficult and painful, yet it’s life enhancing. Without it depression can turn the sector inwards and against itself. This will radically decrease its vitality and potential. The leadership of thinking needs to keep the drive for life and stave off the destructive drive, which a failure to mourn supports. Mourning, however, has to be appropriate to what is lost, what is continuing and to primary task: leaders in the sector need support in identifying ways of doing this and acquiring the necessary courage and resilience it involves.

[1] The conceptual thinking and theory for this Think Piece are from Gabriella Braun’s forthcoming book: ‘Leadership: What’s Love got To Do With It?’ 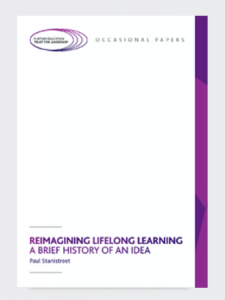 FETL ceased its work and operating with effect from 31 March 2021 and has wound down its affairs in an orderly manner and paid all known debts in full. The Members have followed best practice by placing the Company into members’ voluntary liquidation. They have appointed Sean Croston of Grant Thornton UK LLP to formally conclude the affairs and life of the Company, having concluded their planned work.